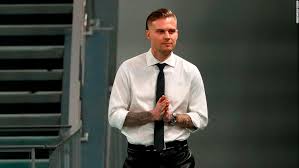 Matthew Williams, the founder of cult street-culture brand 1017 Alyx 9SM, and key figure in the luxury streetwear scene, has been named as Givenchy’s new creative director. He succeeds Clare Waight Keller, who stepped down in April.
The 34-year-old British designer’s appointment marks a noticeable shift in the brand’s creative direction. Waight Keller, who spent three years at the house, concentrated on Givenchy’s haute couture atelier and, notably, designed Meghan Markle’s wedding dress for her marriage to Prince Harry. By comparison, Williams is inspired by subversive style and futuristic design. And, like Louis Vuitton artistic director Virgil Abloh, who has collaborated with Williams, the new Givenchy head mixes high and low fashion.
Williams’ career was launched in 2008 when Kanye West wore one of his jackets during his Grammy performance. For the next two years, Williams made a name for himself by working for Lady Gaga as a creative director for her behind-the-scenes team, Haus of Gaga. Williams has also worked with Dior and Nike.
Though Williams does not have formal design training, he was a finalist for the 2016 LVMH Prize for Young Fashion Designers, and will start in his new role on June 16, presenting his debut collection in Paris in October.
Williams will be in charge of all creative aspects of Givenchy, including menswear and womenswear, and he joins during a particularly turbulent time for the fashion industry, as sales have plummeted due to the coronavirus pandemic and millions of jobs are at risk. Global anti-racism protests have put pressure on the industry, too, for its longstanding lack of cultural sensitivity  and treatment of people of color. Abloh was the first African American to be appointed artistic director, for Louis Vuitton menswear in 2018; and  Rihanna, who launched a collaboration between her brand Fenty and LVMH in 2019  was the first woman of color to head a luxury brand for the group.
Sidney Toledano, Chairman and CEO of LVMH Fashion Group said in an official statement: “I am very happy to see Matthew M. Williams join. Since he took part in the LVMH Prize, we have had the pleasure of watching him develop into the great talent he is today. I believe his singular vision of modernity will be a great opportunity for Givenchy to write its new chapter with strength and success.”
In his own statement Williams said, “I am extremely honored to join the House of Givenchy. The Maison’s unique position and timeless aura make it an undeniable icon and I am looking forward to working together with its ateliers and teams, to move it into a new era based on modernity and inclusivity.”
Adding: “In these unprecedented times for the world, I want to send a message of hope, together with my community and colleagues, and intend to contribute toward positive change.”
Tags:
Previous Article
Tencent is building a Monaco-sized ‘city of the future’ in Shenzhen
Next Article
Rare letter detailing Van Gogh and Gauguin’s brothel visits sells for $237K at auction