Top 10 Most Expensive Champagne Bottles In The World In 2018

Here are the ones that made the distinguished list this 2018: Some people literally walk into fortune, stumbling into gold coins or other precious artifacts. In the case of a team of divers out in the Baltic Sea in 2010, they accidentally dove into them. Shortly in the sea floor, they spotted a shipwreck with a box containing Champagne bottles some of which are 200-year-old vintage still intact and in good condition. A piece of history will cost you, and this proves to be the case here when the Champagnes were promptly sold at an auction. Talk about relativity of fortunes: while the crew of that shipwreck balked at their loss of income, who knew hundreds of years forward their loss would become others’ gain? 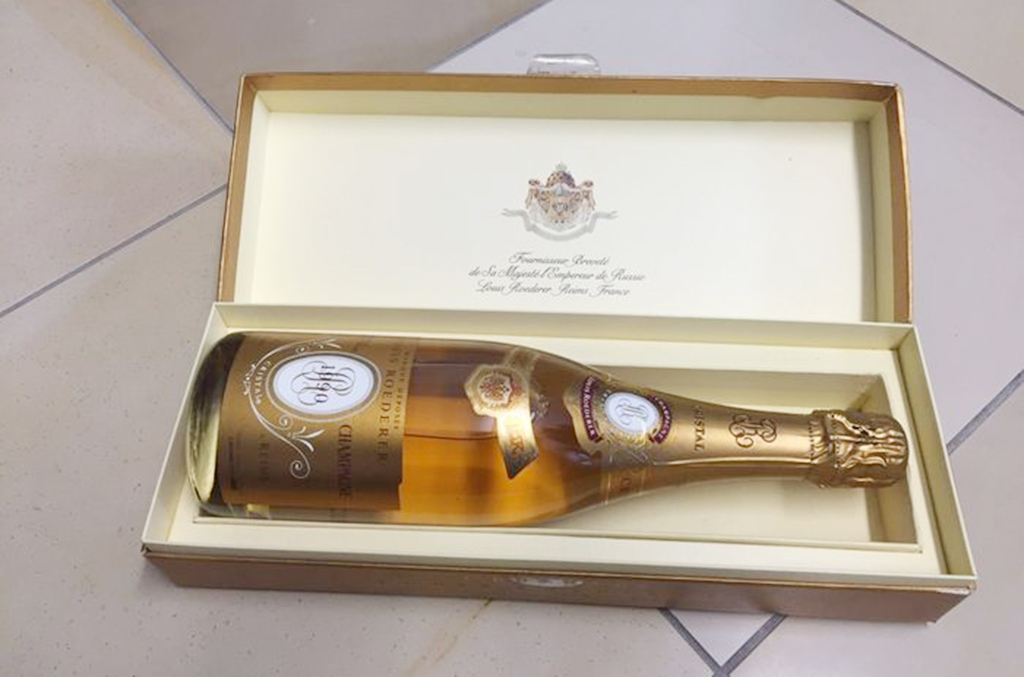 The shipwrecked Champagne earned its price by historical association and extreme rarity, but Cristal Brut 1990 Millennium Cuvee Methuselah scored it through sheer size, which is the equivalent of six liters or eight normal bottles in this case. There’s also the factor of rarity, as this particular Champagne is known to have only 2,000 similar bottles produced. 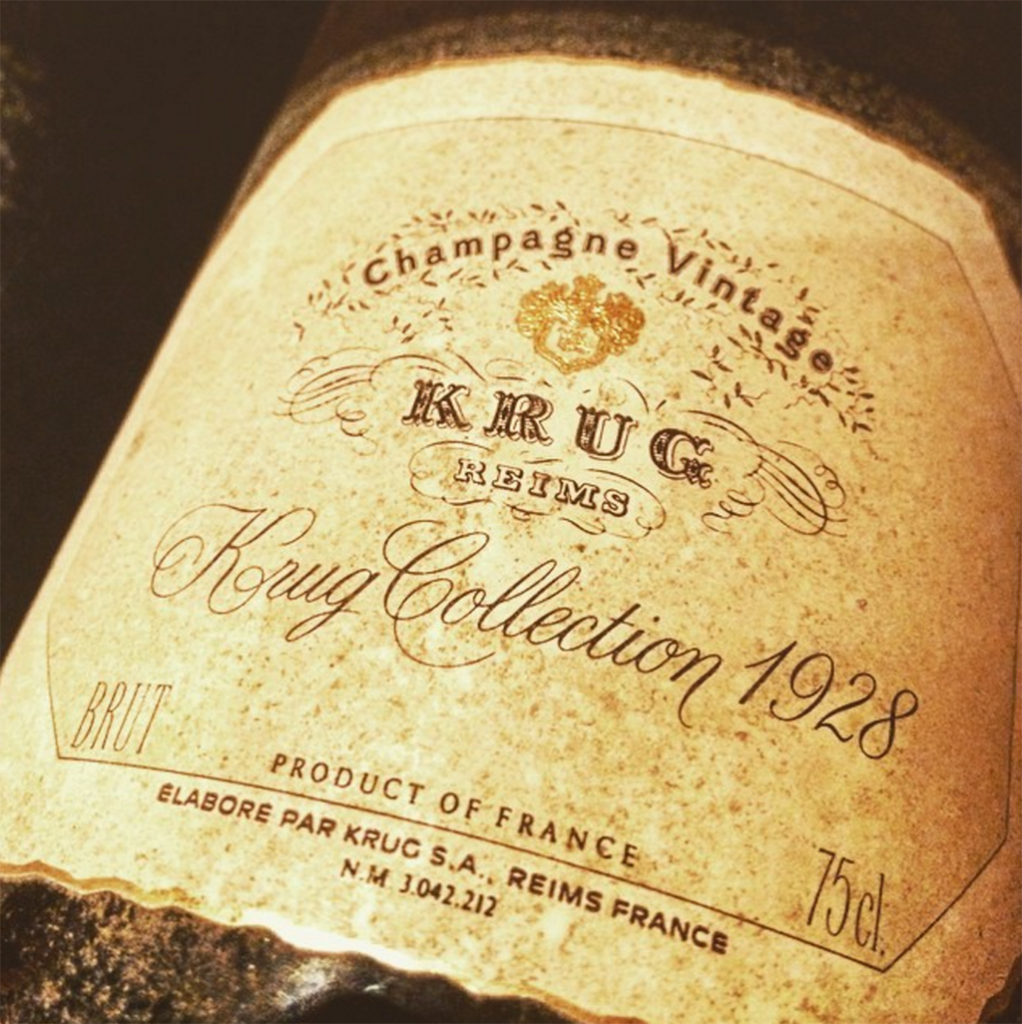 An excellent summer in 1928 and consequently an ideal harvest situation at the end of September conspired to produce this legendary, distinctly rich fermented vintage. Astute marketing, fending off Nazi attention at the height of World War 2, fortunate circumstances in its favor all ensured this 1928 collection stayed in the Krug cellars for decades. A reputation for being the late King George VI’s favorite also doesn’t hurt. 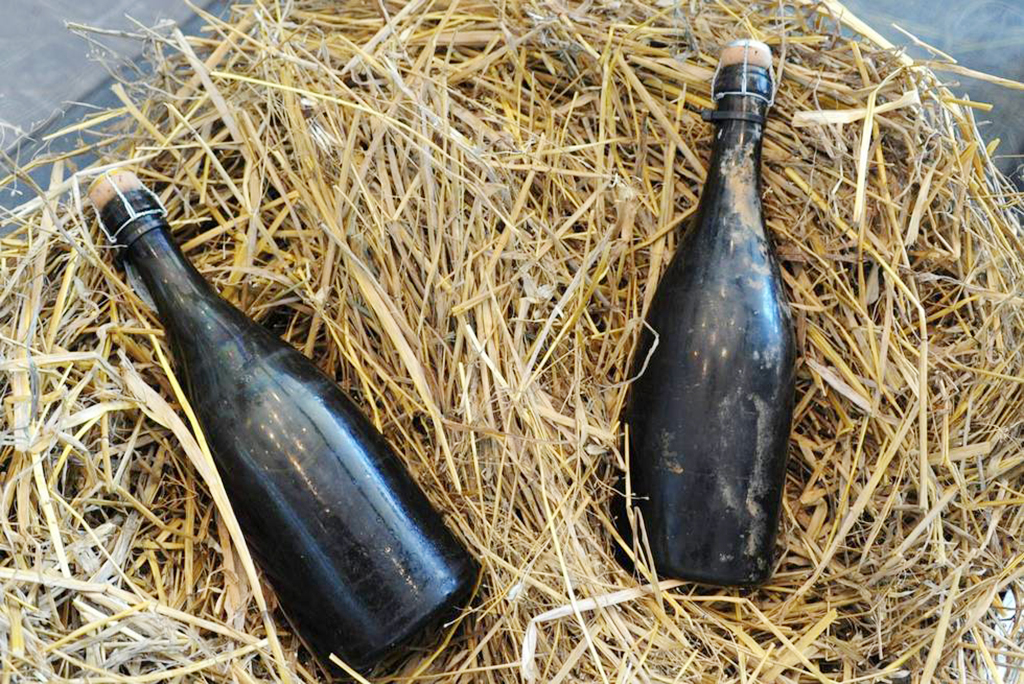 “Message in a Bottle” turns “Fortune in a Bottle” this time around and straight right up as seventh in the top ten most expensive bottles of Champagne in the world.

Part of the Baltic Sea shipwreck haul mentioned earlier, Veuve Clicquot remains an elite brand today, but an 1841 bottle popping up out of the water abyss certainly deserves an equally supernatural price tag, and the Acker Merrall & Condit auctioneers promptly brought the hammer down to finalize historical proceedings. 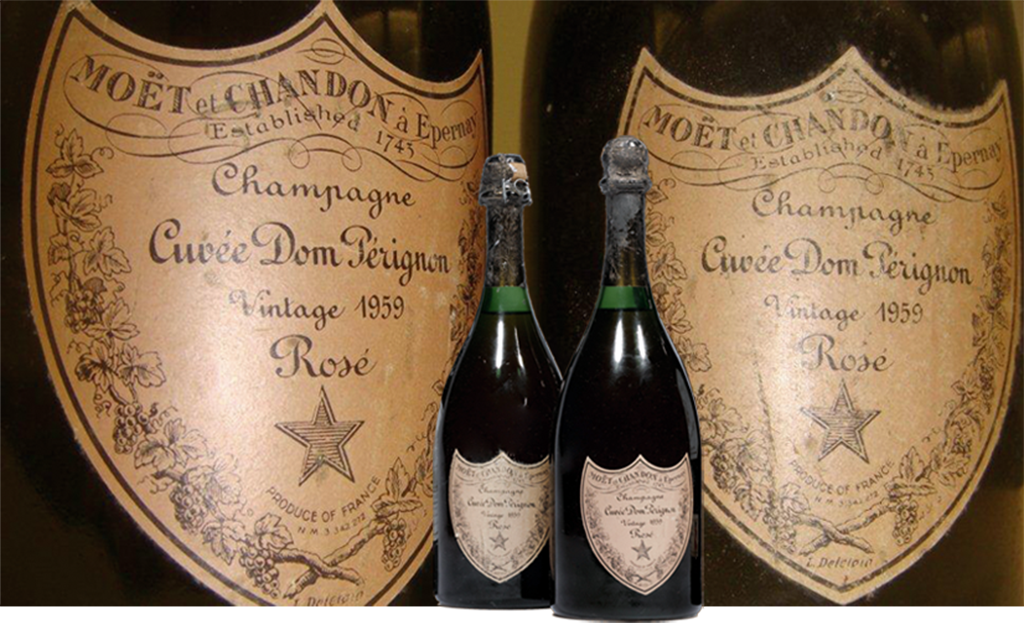 In 1971, the Shah of Iran ordered several bottles of the first vintage of Dom Pérignon Rosé chilly served in Persepolis at the lavish festivities celebrating the 2500th anniversary of the founding of the Persian Empire by Cyrus the Great.

In 2008 two of that legendary Dom Pérignon Rosé Vintage 1959 landed at an auction by Acker Merrall & Condit for US $84,700 in New York, which means the winner could indulge with one bottle and save one for investment.

Forty-two grand for a Champagne?

Well, it’s a Dom after all, and no Dom is ever cheap. When you consider that 1959 was a time when the likes of Taylor, Dean, Ball, Day, Presley, Wayne, Sinatra, and Monroe were all over the place, then you have history and “aged” never having it so good together.

If you fancy this bottle, you will have to be extremely lucky to find one available. Only 306 bottles of the 1959 Rosé Vintage were ever produced—and they were never officially sold. 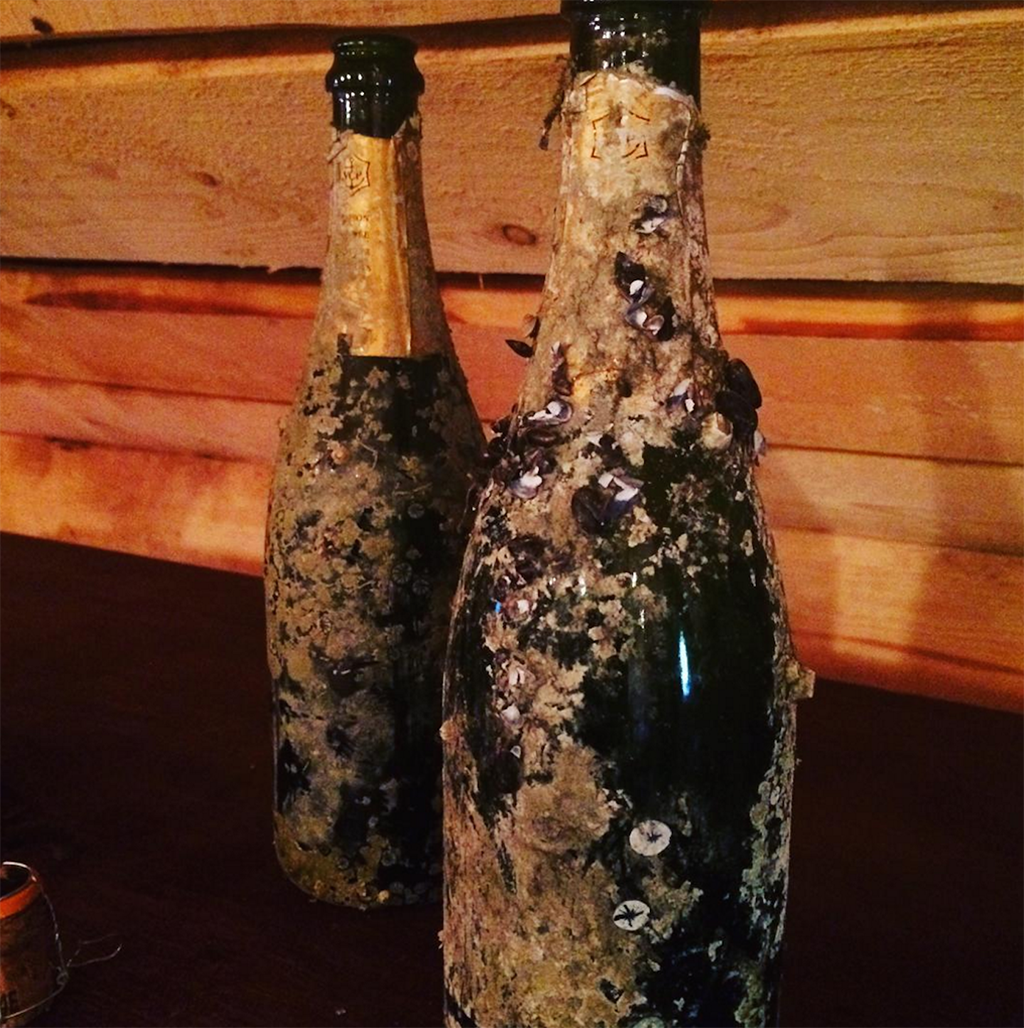 It’s not exactly the barnacles encrusting this bottle that drove its price sky-high, more like the idea of resurrection Champagne edition: the House of Juglar ceased to exist in the 1840s, but this is one spirited bottle that overcame sea limbo after a shipwreck and purchased passage into our times and into the busy halls of modern auction houses. 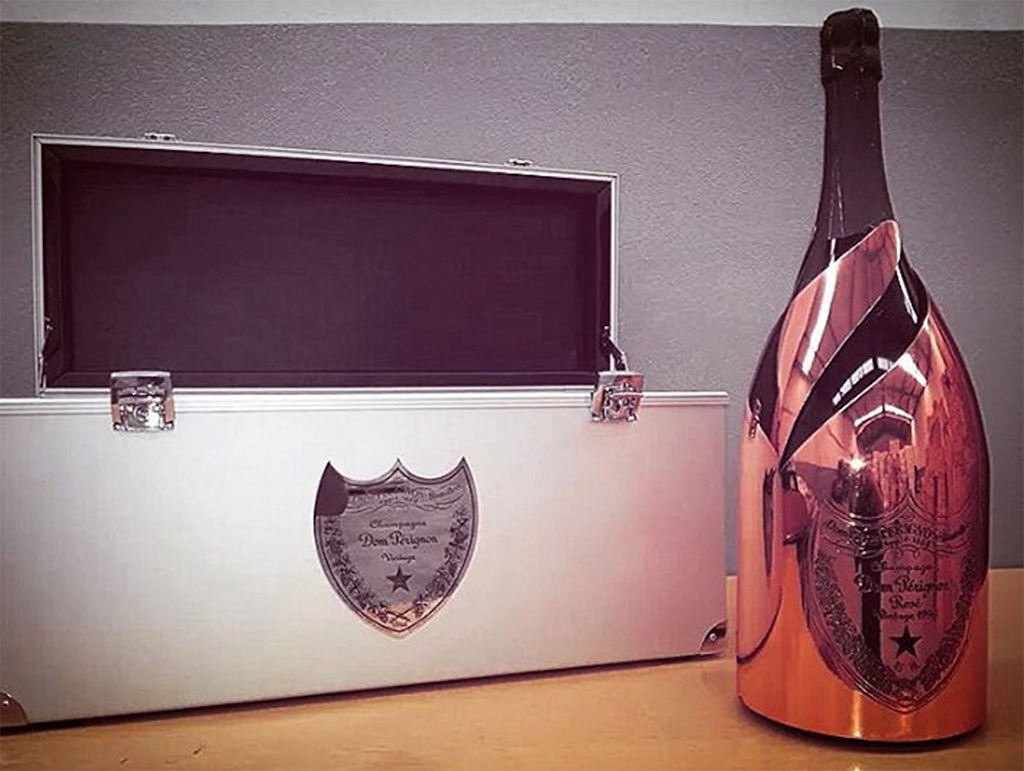 Consider that only 35 of this bubbly is ever sold, it is plated gold, and you are to receive the equivalent of six liters when you part with your $49,000 if you are ever so lucky to purchase one.

The price tag gets you distinct aromatic smoky accents, and the 1996 Dom Perignon Rose Gold Methuselah is also reported to be strong, radiant, and sharp with a firm finish. 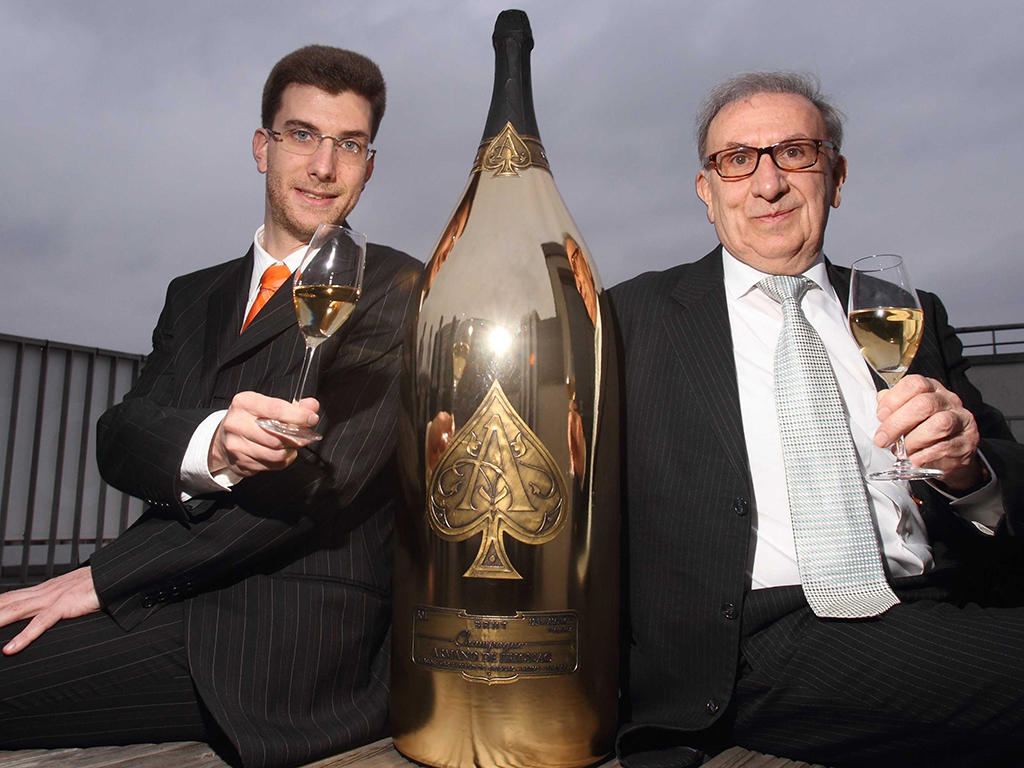 Rap music and Champagne fuse together to create this 15-liter behemoth, as Jay Z, the owner of this brand, expands his business credentials behind this one. Imagine the austere environment of Champagne swaying to the rap rhythm of this mega-bottle from Armand de Brignac—aptly called Ace of Spades by many.

Fifteen liters sparkling wine in one giant bottle might seem too much, but you have to ask how long it will last amid a posh pool party of a hundred or so lasting over a whole night. 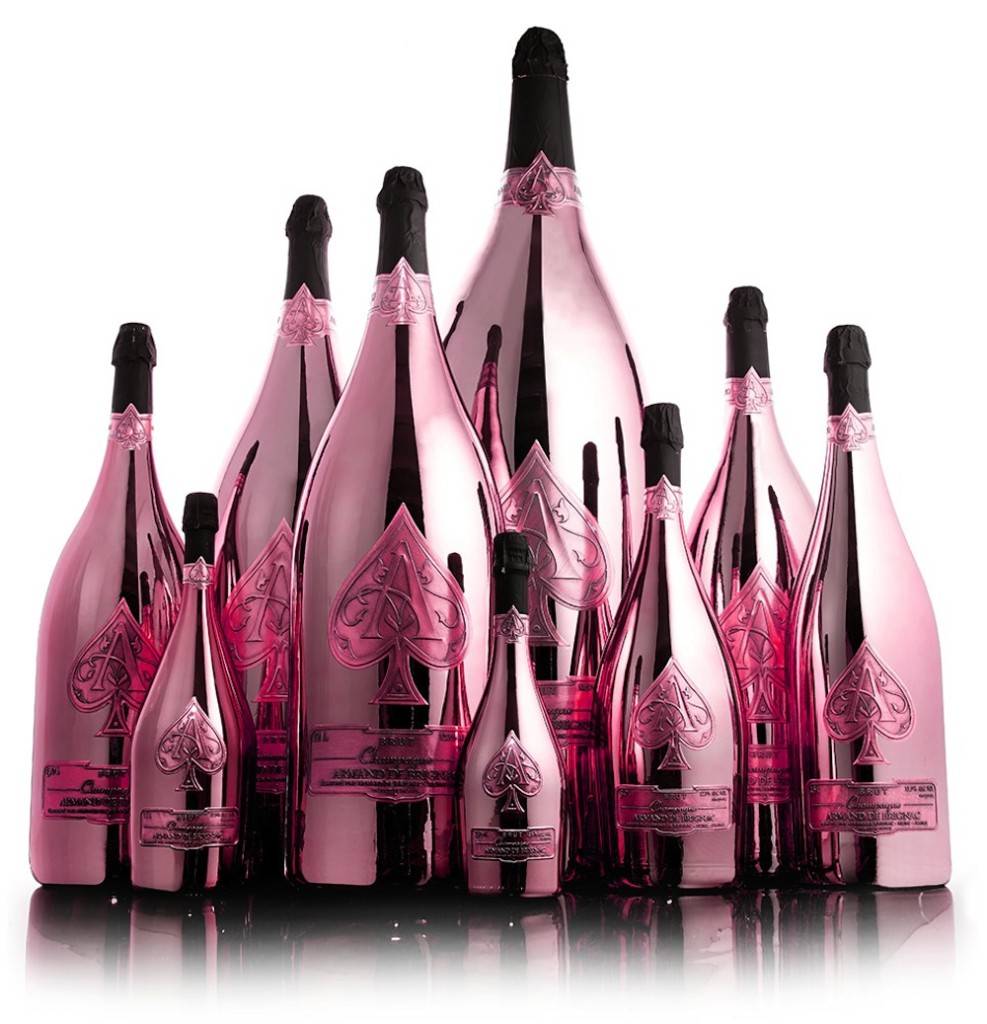 It didn’t take more than two years before Jay Z upped the ante pushing up bottle size to a colossal level through the 2013 Armand de Brignac Rose 30-Liter Midas.

The party needs are getting meaner, and the weight and height of this one too—over 40 pounds, 4 feet of it—which is equivalent to 40 standard-size bottles. No problem if a Hulk Hogan figure is among the night sparkly revelers. What happens, though, if someone accidentally breaks this monster? 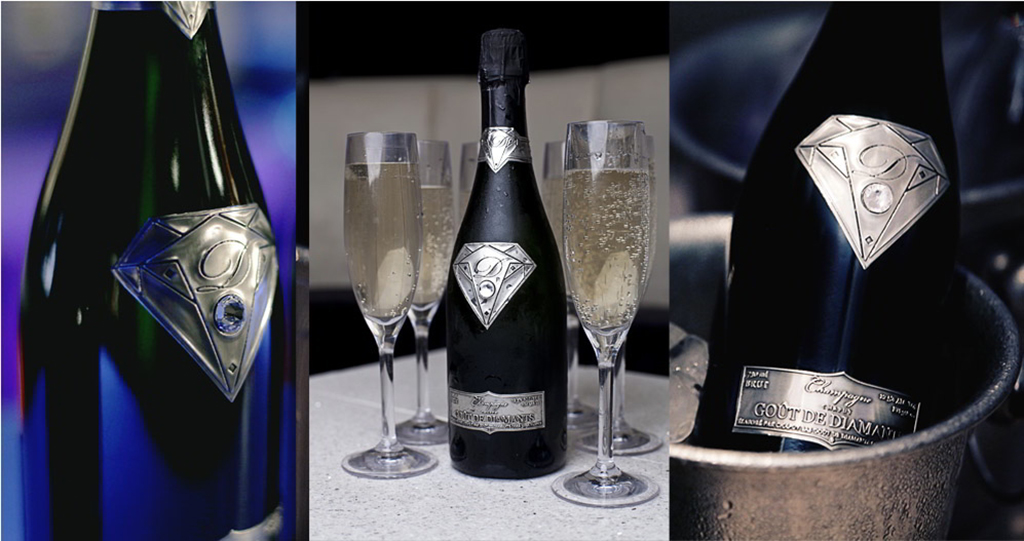 The lone survivor from our previous Top 10 Most Expensive Champagne Bottles in the World, and still at number one.

Inside this Champagne bottle is a blend of Grand Cru Chardonnay, Pinot Noir and Pinot Meunier that offers a floral, refreshing and creamy texture and ends with a light and elegant finish, says the champagne maker.

Indeed, the dreamy flavors enabled this wine gem to win “best taste” in 2012 according to Champagne Business News, but even that is not enough reason why you might not want even your mother or anyone else for that matter to handle this bottle. Ever.

Simply because of this: not only is the Taste of Diamonds’ Superman-style signature logo handcrafted from 18-carat solid gold, but also fixed prominently at its center is a single, flawless deep-cut white diamond weighing 19 carats, which replaces the Swarovski crystal that typically sits there.

Aside from the diamond and gold logo works, the one-of-a-kind bottle itself is not left to ordinary working mortals, crafted by no less than Alexander Amosu, a name those used to customized iPhones and BlackBerrys would easily recall.

CHEERS TO SUSTAINABLE CHAMPAGNE
HighLifeChannel May 02

INTRODUCING THE ROLLS-ROYCE CULLINAN: A NEW KIND OF OFF-ROADING