Meet the oldest winner of the world’s longest horse race

Standing at the finish line, 70-year-old Bob Long took a moment to reflect on what he’d just achieved.

Behind him lay more than 600 miles of Mongolian steppe, a vast expanse of wild grassland which stretches endlessly into nearby China.
Not only had the American just navigated this unforgiving terrain riding semi-wild horses, along with its extreme weather and raging winds, but he also did so faster than anyone else.
As a result, he not only became the oldest person to complete in the world’s longest horse race — the Mongol Derby — he became the oldest person to ever win it.
“I’d been pushing so hard to get to the end,” Long told CNN Sport, from his home in Idaho, US, where he was recovering from his seven-and-a-half-day adventure.
“I had to stop for a minute and try to think back through all of the excitement and stressful instances of the trip.”
Having ridden horses all his life, Long was inspired to take on this challenge after watching “All the Wild Horses,” a film based on the grueling event.
He “hated the thought” that he wouldn’t be able to complete such a feat so set about preparing his mind and body for the “hardest, toughest, most demanding thing you can do on a horse.”
“Preparation trumps youth,” Long proudly stated, as he adapted back to normal life.
“I was really, really ready for this event when I finally got there and some of the other riders were a little bit less prepared.”
The annual 1,000-kilometer race (620 miles), officially recognized by the Guinness Book of Records in 2011 as the world’s lengthiest, takes its inspiration from the Mongol Empire’s pioneering postal service.
Genghis Khan, leader of the Mongols between 1162 and 1227, established and expanded the “Ortoo” — a messenger system that saw riders travel on horseback between outposts, stopping to either rest, swap horses or pass the message onto another rider.
After traveling from the capital Ulaanbaatar to the start camp on the steppe, the 40 riders — each of whom has paid about $13,000 to enter — are provided with their own semi-wild Mongolian horse on which to head out into the wilderness.
Twenty-five horse stations, or “urtuus” to use the Mongolian name, now line the route with the riders changing mounts every 20 miles to prevent the horses from burning out.
Despite years of experience in the saddle, the mammoth nature and unpredictability of the task forced Long to dig deep and rely solely on his own volition.
Despite having an extensive support system that would monitor racers from afar, the physical strain of riding such long distances naturally took its toll.
Leg soreness plagued the trip, to a point where squatting down to sit became an unbearable experience.
However, it was the mental test that proved the most difficult to conquer.
As Long forged ahead, the chasing pack was up to three hours away which meant he would sometimes go 25 miles without seeing another living soul.
“I just didn’t have anybody to interact with,” he said, revealing he had hoped one of his fellow competitors would catch up.
“That means I had to make all the decisions about navigation without the ability to have another person’s input.”
Spending days alone traveling through the stunning wilderness became a spiritual adventure for Long. It allowed him to reflect on his life and provided time to think about family members that he had recently lost.
“I had some times where I need some guidance and I actually pleaded with God to give me direction and to make me worthy of the challenge,” reminisced the retired health company entrepreneur.
“I believe in God and a higher power and it was really comforting for me to use that as a crutch to keep going.”
Despite extensive preparation, there were certain things along the way that were out of Long’s capable control. One of which was the weather.
Conditions on the steppe would switch suddenly from torrential rain to sweating heat but being entirely immersed in nature also provided some memorable moments.
From wading through large river crossings to watching the local herdsmen, Long fell in love with the country and communities along the route.
With a strict 8 p.m. curfew, when participants would have to stop riding for the day, Long found himself knocking on doors to find a place to sleep at night.
Despite an obvious language barrier, the random interactions with the local people turned out to be the most humbling experiences.
“They all accepted me and some of them gave me their beds and they slept on the floor,” he said.
One particular moment, when staying with a young mother and her two daughters, still stands out among the rest.
“It has just quit raining and the sun was setting,” he said fondly.
“The two daughters were sitting on the edge of this corral, where they kept their calves, singing some kind of Mongolian lullaby. It was so neat to see.
“In the morning, she [the mother] wore her ceremonial gown and milked the cow for me. I had fresh cream milk on sweet rice cereal. Man, it was so good.”
Still not bored of riding, Long has been back in the saddle since arriving home and has not ruled out another Mongol Derby.
“My personal definition of success is whether you do it again,” he added.
Usually satisfied to stay under the radar, he has been asked to give a presentation to his old office and has enjoyed telling friends and family about his trip since returning to the US.
However, he’s more than aware that most people passing by will have no idea of his incredible feat, something which makes the resilient rider smile.
“I did this really, really hard event and the rest of the world is still going on about its business,” he laughed.
“I’m just aware that there are people driving by right now that don’t even know what happened.” 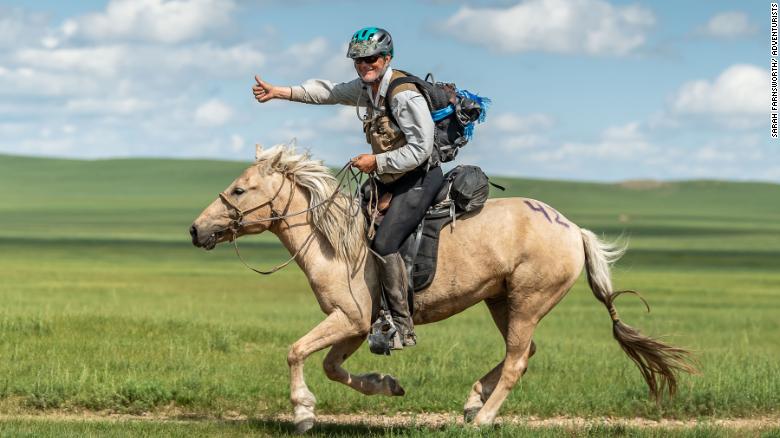 Tags:
Previous Article
TOYOTA ANNOUNCES 90% OF VEHICLES FOR 2020 OLYMPICS WILL BE ELECTRIFIED
Next Article
Here Come the Wheat Whiskies