All whiskey is made from grain, but in the U.S., we tend to reserve our wheat supply for bread and breakfast cereal, not spirits. Which is a shame, because when used in a whiskey mash bill, wheat adds a unique, fruity sweetness and a subtle spicy flavor profile. It’s what Bill Samuels added to the Maker’s Mark recipe back in the 1950s to distinguish it from other bourbons, and it was such a hit that it hasn’t changed at all since. Some say the wheat ingredient is what draws fans to Pappy Van Winkle bourbons from Sazerac Co.’s Buffalo Trace, those highly allocated, semiannual releases at 12-, 15- and 23-year age statements that draw an annual frenzy —and attention from bandits. And it’s what disappointed drinkers look for in other less elusive bourbon bottlings if they can’t find it.

American whiskey sales in 2018 rose 6.6%, or $224 million, to $3.6 billion worldwide, according to the Distilled Spirits Council. However, unlike “wheated” whiskeys such as Pappy or Maker’s, wheat whiskey has accounted for only a tiny fraction of that figure. That could be changing. Straight wheat whiskey contains 51% or more of wheat in its mash bill, as 51%-plus corn is to Kentucky bourbon and rye is to, well, rye.
Brown-Forman Corp.’s Woodford Reserve is no stranger to experimentation, but it’s taken decades for the distillery to come around to making a wheat whiskey. This summer, Woodford Reserve debuted its first straight wheat whiskey, simply known as Wheat (45.2% alcohol by volume, $35), as a permanent part of the brand’s portfolio. It contains 52% wheat, 20% malted barley, 20% corn, and 8% rye in its mash bill.
“Coming out of Prohibition, the federal government provided guidelines for four types of American whiskey—bourbon, malt [barley], rye, and wheat,” says Woodford Reserve master distiller Chris Morris. “We wanted to honor all four expressions, and we now have all four in our permanent family of Woodford Reserve brands.” (The others are a straight bourbon, a straight rye, and a straight malt.)

Morris says the whiskey serves to round out the range of characteristics available among all the Woodford spirits. “Double Oaked [bourbon] is sweet. Rye is spicy. Malt is nutty. And Wheat is fruity.” Morris also notes that because so few straight wheat whiskeys exist on the market, he sees a competitive edge to this portfolio addition. Until now, the best-known bottling of American straight wheat whiskey has been Heaven Hill’s Bernheim brand, and even that recently got a makeover (more on this below) to bring it more on trend.

The difference is noticeable on the palate right away. Not only is the whiskey fruity, as Morris describes it, but it also has a soft, creamy mouthfeel, unlike many typical American whiskeys. It tastes like a boozy, liquid version of hot cereal (yes, you could say Cream of Wheat) topped with stewed apples and fresh bananas, rounded out by a puff of charcoal flavor from the new charred oak barrels the whiskey is aged in.

Bartender Steven Wicker of  Sweet Liberty  in Miami says he appreciates the softness of wheat whiskey in cocktails. After tasting the Woodford Reserve Wheat, for example, he says, it would be a good “gateway” whiskey for someone who isn’t used to the more robust characteristics of traditional bourbon or rye. “I would reach for the WR Wheat to sub it out as base in traditionally boozy, whiskey-based cocktails (Old Fashioneds, Manhattans, etc.) because it would mellow out some of the harsh tones customers may not be accustomed to having yet.”

Wheat whiskeys in general have less sweetness than corn-based whiskies and are less floral and spicy than a rye, echoes Sweet Liberty’s bar manager, Fraser Hamilton. On mixing: “I think it goes with with fall fruit flavors—apples, pears, some darker stone fruit. It gives cocktails that toffee, dark burnt-sugar complexity.”

Some wheat whiskeys on the market contain 100% wheat, while others opt to include it as the dominant grain in the mash bill. It’s worth experimenting with a few, both neat and in cocktails, to discover which one works best for individual palates. 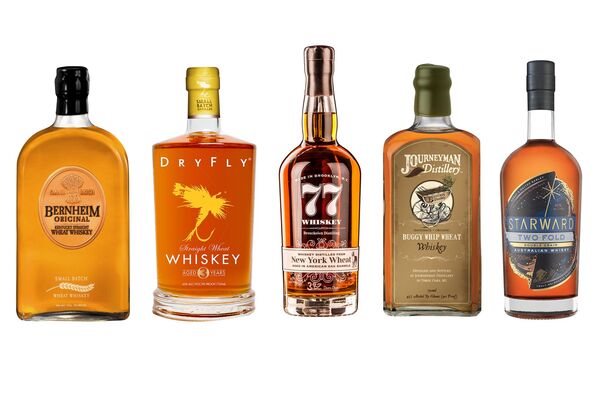 Previously released as a no-age-statement spirit for decades, this OG straight wheat now carries a seven-year age statement. Named for Woolfe Bernheim, the 19th century founder of Bernheim Distillery in Louisville, Ky., and now owned by Heaven Hill Distilleries, Inc., the liquid is aged in Nelson County rickhouses and is noticeably more robust and spicier than the Woodford recipe. Try it in a terrific Manhattan variation.

Based in Spokane, Wash., Dry Fly Distilling goes all-in on the wheat front, using 100% locally sourced winter wheat, then aging the distillate a minimum of three years in oak barrels with a medium char. There’s a marshmallow-like sweetness to it, with a hint of espresso bean in the finish.

Another 100% wheat whiskey—this time with grain grown in upstate New York, then distilled in Brooklyn and aged in new American oak for one to two years. The whiskey is hot and sweet, with cinnamon toast aromas and maple syrup on the palate, ending with a spicy pepper jam kick.

The Featherbone Factory in Three Oaks, Mich., manufactured two of the biggest necessities of the late 19th century—corsets and buggy whips. Now repurposed as a distillery, its 100% Michigan-grown wheat whiskey is far more au courant. The grain is hand-milled and distilled on site, then aged for an undisclosed amount of time in new oak barrels from Minnesota. For those who enjoy the kind of bracing whiskey cinematically portrayed in Old West saloons, this big kicker is the one for you.

Australia has been going through a craft spirits boom similar to that in the States. This new release from the Melbourne distillery comprises 60% wheat whisky and 40% single malt whiskies—for a 60-40 wheat-to-malted barley blend—that are distilled and matured separately on site in Australian red wine barrels before bottling. Warm and comforting flavors of baked orchard fruits are swathed in vanilla, with a black tea and pie spice finish. It’s available in 35 U.S. markets for now, with a bigger launch coming this fall.