Franny Norton on his remarkable career: ‘If we win the William Hill St Leger at Doncaster it would be my crowning achievement’

If Sir Ron Priestley wins the 243rd William Hill St Leger at Doncaster tomorrow it would be hailed for being a third Classic for trainer Mark Johnston and for capping the remarkable career of his rider, Franny Norton.

Norton is the jockey who sits next to Frankie Dettori  in the changing room, has a cult following at his local racecourse Chester which he rides without peer – though it took him until May to win a coveted first Chester Cup – and is something of a legend (in the modern use of the word) in the sport.

The only jockeys who are older than the Liverpool born, raised and now resident again Norton, 49, are Jimmy Quinn and John Egan. He, Joe Fanning and Dettori are all within a few months of each other and are, still, just the right side of 50.

“I get a birthday text every year from Frankie telling me he’s four months, 18 days and a few hours younger than me!” says Norton whose Scouse sense of humour is, one imagines, the antidote to Dettori when the Italian becomes a handful. “We all sit by the door – because we’re the next out of it!”

While you could argue that his fellow 49-ers are riding as well as ever, the evidence suggests Norton is still improving. Last year he rode 112 winners, his best ever score. “Still going up through the gears,” he points out.

Norton was born in Belle Vale on the outskirts of Liverpool. His father worked for Dunlop (tyres rather than the trainer) and he was one of four brothers. No one in the family was into horseracing but he was tiny and after the constant refrain of ‘you’d make a good jockey’ he decided to give it ago.

“I was on a youth training scheme to be a chef at the time,” he explains. “The racing school was full, I had never sat on a horse and a trainer called Peter Arthur in Didcot was the only person who’d take me. It was the first time I’d left Liverpool but I was street-wise. I’d done a lot of boxing as a kid, I was a black belt at Judo. It comes from being small, the need to be able to look after yourself.”

Having left school in 1986 never having sat on a horse, he had his first ride in 1989 and by 1991 had won a couple of big York handicaps, the Johns Smith’s Cup on Halkopous and the Ebor on Deposki. Both horses carried 7st 3lbs which he did ‘on a big saddle.’

“I had too much too soon,” he recalls. “When I lost my claim I really struggled. I rode 11 winners, had hardly any rides, a tax bill I couldn’t pay and my confidence was shot. I had to regroup.

“So I started boxing again to focus, to help me stay off the drink but it started taking me places I hoped I wouldn’t reach. I was picked to go to the England boxing camp at Crystal Palace ahead of the Commonwealth Games. I came out of a training session one day to a call from Mick Channon asking me to ride at Sandown the next day. I had to ask myself ‘do you want to be a boxer of a jockey?’

“I asked a friend called John Naylor, a jockey who ended up with 10 fights as a pro. ‘Don’t even think about boxing,’ he said. ‘It’s a filthy game – get your head down and stick to racing.’ Something like one per cent of fighters come out of it financially secure. The next thing Dandy Nicholls was looking for a jockey and I was back in the game.”

One of the remarkable aspects of Norton’s rise and rise is that he was the original light-weight. He still wakes up a stone lighter than many of his colleagues but these days the demand for a lightweight in big handicaps (formally their bread and butter) is all but gone.

However if that is a perceived disadvantage, he has turned it into an advantage because he does not have to waste or sweat. Ten years ago with no need to lose weight but knowing he was doing it all wrong, he was the first jockey to go up what is now a well-worn path to the door of Dr George Wilson at Liverpool John Moores University to sort out his nutrition.

He is still passionate about boxing. “I don’t listen to music, I listen to boxing podcasts,” he points out. “When the season calms down, I’ll go boxing a couple of times a week. Shae, my 13-year-old son, boxes at the Solly (Salisbury Club) in Liverpool. He’s just been carded (cleared medically to fight) and he’s looking decent at the moment. Even if it’s only one fight – it takes a man to get into that ring. I’m encouraging him.

“I took him to there recently and I’ve never known a vibe like it. There were five coaches, the kids banging away, working hard. It was ‘wow.’ I love my lad in that environment. You don’t get that in school or work. It gets them off the street and gives them a purpose.” 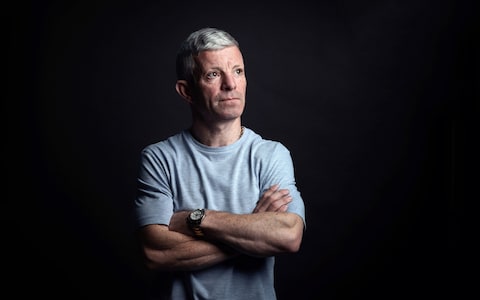 He is not entirely sure when Johnston came knocking but it was while Folkestone was still in business as a racecourse – it closed in 2012. “He reinvented me,” says Norton. “I’m a better rider and a better person since I started riding for him. It’s all because of him.

“The first thing a jockey must accept is that we don’t have a God-given right to ride any horse. As soon as you can get your head round that you can crack on. Mark has so many runners I might win on one and Joe (Fanning) would ride it next time or vice versa.”

Norton, who vowed he would never base himself in Liverpool or marry a Scoucer (he lives in Knowsley and his wife Rachel is from Liverpool), is unbeaten in four starts on Sir Ron Priestley, two of them over tomorrow’s distance of a mile and three quarters.

In a way both horse and jockey have come up through handicaps. “The trip, track and ground are all in my armoury. We won’t know until the day if he’s fast enough. He’s only had one blip which was Ascot and he showed plenty of pace that day. He’s not been in this company before but he has every right to be there.

“Were he to win, it would, 100 per cent, be my crowning achievement. I know I can’t go on forever but while I’m fit and healthy, enjoying it and the boss still wants me to ride I’ll keep going. There are no exit plans yet!”

Whoever buys Prince Charles’ former $6.7 million country estate must be prepared for a royal drop-in