High in the Alps, Igloo Hotels Offer the Epitome of No-Frills Luxury

It sounds like a tough sell: a hotel room with no windows, no heat, and no bathroom, all for the price of five-star accommodations. And yet, thousands of people a year jump at the chance, paying upward of $500 a night to stay in igloo hotels carved from piles of snow and ice atop ski areas across the Alps.

Over New Year’s, I stumbled onto the igloo hotel near Gstaad in Switzerland, where it sits at 1,950 meters (6,400 feet), just below the summit station of the Saanersloch gondola. There’s an outdoor bar with views across the surrounding peaks for skiers passing by, and inside there’s a restaurant where the ice casts a soothing blue glow, and the wooden tables are set into booths carved from the snow.
The five ski-in-ski-out “Igloo Villages” (Iglu-Dorf in German) are similar to the various ice hotels built every winter in Scandinavia, but they’re far more accessible in resorts such as Davos and Zermatt.
Over about three or four weeks every autumn, snow is piled on top of massive balloons to create the basic structure of the igloos. Once the snow has settled, the balloons are deflated and workers go in with chainsaws, shovels, and carving tools to shape the rooms and built-in furniture such as beds and benches. Later, artists carve ice sculptures, with each hotel featuring a different theme such as ancient Rome, Nordic mythology, James Bond, or sea creatures.

Each of the Gstaad hotel’s 11 rooms is its own smaller igloo, linked by a snowpack hallway to the restaurant, a sauna, and an outdoor hot tub. For most of the rooms, bathrooms are in a shared wooden structure at the end of the hallway. Three rooms have private baths, one with its own hot tub.

The rooms are cozy, with recessed LED lights giving the space a bright and airy feel, despite the lack of windows. The beds are carved from blocks of ice and topped with fur throws, a padded mattress, expedition-strength sleeping bags, and comfy pillows. Temperatures remain steady at a degree or two below or above freezing, no matter how gnarly the weather outside. “Snow provides really good insulation,” says Marius Mosimann, manager of the Gstaad hotel. “If it’s minus 10 or 20 outside, when you come in you feel like you’re walking into your apartment, even if the thermometer shows it’s zero degrees centigrade.”

Even so, most visitors stay for just one night to have the experience, soon retreating to the warmth of feather beds and central heating in the valleys below. (Unless you opt for the ensuite, nighttime trips to the bathroom, for instance, involve hopping out of bed, putting on a snowsuit and boots, and trundling down a hall—not the most relaxing of groggy experiences.) 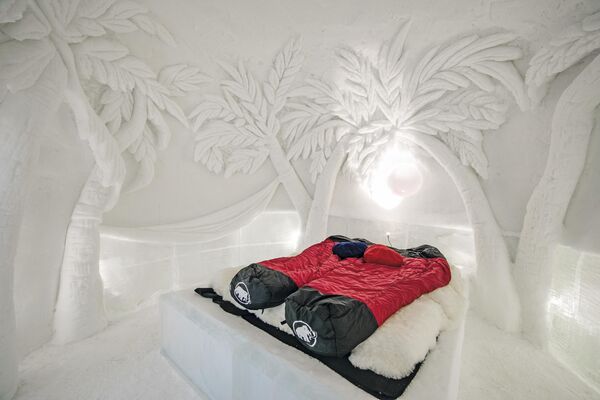 Dinner for the 40 or so guests on any given night is served in the restaurant, with just two menu options: cheese fondue or pasta with red sauce. “Our kitchen is an igloo, too, so things are pretty tight,” says Mosimann. The diners generally stick to their ski clothes, often with hats and sometimes even gloves; after a night under the snow, a warming breakfast is served at a mountain restaurant a few hundred yards away.

Iglu-Dorf hotels are located in Davos, Gstaad, and Zermatt, Switzerland; in Kühtai, Austria; and in Zugspitze, Germany. Each hotel can accommodate from 32 to 48 guests in suites, doubles, or dormitory-type rooms. The hotels all have sauna, hot tub, or both. Prices (including dinner and breakfast) range from 159 Swiss francs ($160) per person in a six-bed room to 539 francs per person in a suite with private bath and hot tub. 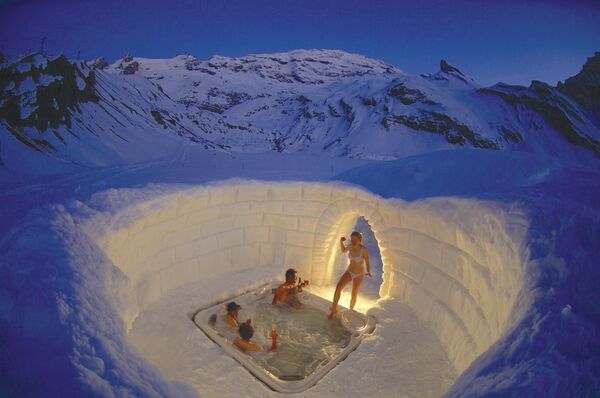 STAY IN A REPURPOSED PRIVATE PLANE, YURT OR SPACESHIP