INTRODUCING THE ROLLS-ROYCE CULLINAN: A NEW KIND OF OFF-ROADING

When you think of a Rolls-Royce, what comes to mind? Probably the words luxury, elegant and chauffeur driven – not necessarily in that order but, we’re almost certain off-roading isn’t one of them. Unless you’ve met the Cullinan that is.

We were given the privilege to experience the beast that is an unassuming SUV. A tag Rolls-Royce might never have been associated with, but stick with us before you zoom off – you’re in for a bumpy ride. Fear not, it’s installed with great suspension.

While most sport-utility-vehicles really do what they say on the tin; built to be off-road, amongst the mud, dogs in-toe and generally not family friendly, the Cullinan, however, disrupts the market. Albeit the most expensive SUV of its kind, it’s equally the most opulent. Submerged in luxurious touches from built-in massage seats in the rear, a boot installed with picnic chairs, and a hidden champagne cooler in the armrest, the list really does go on…and it’s not slowing down either.

Whisked off to Scotland’s Speyside, we witnessed the vehicle in its true beauty across the Cairngorms both on and off-road. Nestled amongst 300 acres was our home for the next 48 hours, newly-renovated Arndilly House owned by ex-Investment Banker and 29-year old, Jerry Pfletschinger. (Yes, you might want to read that again). When I say newly-renovated, I mean we were the first to put our heads on the pillows, clay pigeon shoot  in the grounds and test drive its woodlands. To remain as a family home, Arndilly House is nothing short of spectacular for a vehicle just as majestic, after all, its name is taken from the world’s largest diamond. Unimaginably the view from the dining room at breakfast looked out onto the powerful cars, sitting in their glory against a backdrop of rolling hills and believe it or not, the glorious Scottish sunshine – a moment just a handful would ever truly be able to see in their lifetime. And by that, I’m not referring to the sun shining in Scotland.

Alex Innes, Head of Coachbuild Design at Rolls-Royce talks of the car in its elegance, a machine that signifies extraordinaire. Displaying a very robust structure, the Cullinan is made in a three-box profile, which deters the model away from a usual utility-vehicle, that is often two-box and instead leaves it with a limo-esque touch. However, in order to compete with the magnitude of the countryside consisting of bumps, turns, and curves, the car’s exterior projects outwardly, predominantly with its pantheon grills that sit higher than usual, evoking an assertive quality.

Generally when driving a Rolls-Royce you’d want to be significantly delicate, however, the Cullinan’s ‘off-road’ mode adopts precise handling and smooth suspension, allowing you to enjoy the thrill without the discomfort. When off-road it’s obvious the vehicle doesn’t struggle – though we wouldn’t recommend trying to drink a hot drink whilst doing it.

The moment you’re in motion, the higher-than-usual seating and fluidity allow you to instantly get lost in the fact you’re driving a car of such value and grace; the steering is lucid and the pedals operate at a sweet spot between light and robust. However, its exquisitely-made seating and nifty mod-cons certainly don’t allow you to forget that you are still very much driving a Rolls-Royce.

A bit hesitant to introduce an SUV to the family, Rolls-Royce CEO Torsten Müller-Ötvös, now sings the car’s praises. Whisking off into the Cairngorms, Torsten takes a gentle drive, conversing and soaking up the dramatic scenery. Exactly, the way a Rolls should be driven.

When asked if he ever saw himself working as the head of such a prestigious company during his MBA in Munich, his response unfolded as, ‘definitely not – after almost 10 years at Rolls-Royce, it’s still very much a privilege’. Previously with BMW Group, Mr Müller-Ötvös joined the luxury motor company a few years after the reintroduction of Mini’s crash in early 2000 – a pivotal moment that to this day still claims to be one of his best achievements. While Rolls-Royces are not the most environmentally friendly, every single made-to-order car that goes through the 800 hours of production is made by hand, other than its paintwork. Which means the company never houses any stock. Furthermore, the vehicle is made to last, so much so, those who purchase one, do so for a lifetime.

Located in a quintessentially British and a rather sustainable setting, Rolls-Royce’s home at Goodwood is tucked away in South Downs National Park, a natural setting that compliments the brand’s voice. The exterior clad is made from a mix of limestone and cedarwood, all from sustainable sources, whilst its timber louvre panels, activated by a weather station on the roof, control how much light enters the building to reduce their demand for electricity. The floor-to-ceiling windows run the length of the Assembly Hall, providing plenty of natural light for its craftspeople.

The large central lake attracts numerous wild birds and stores excess water to minimise flooding. Across the 42-acre site, they’ve planted over 400,000 plants and trees of more than 120 species, and all green waste is composted. Not only that, they have an eight-acre curved living roof – the largest in the UK – also home to plenty of plants which helps better the building’s insulation and reduce rainwater runoff.

The brand aims to minimise waste during production – over 60% of their waste is recycled. Leather off-cuts are reused in the fashion and footwear industries and surplus wood veneers are donated to a local charity to make furniture and other fundraising products. Over the course of five years, the luxury company has reduced its energy footprint by 29% per motor car.

‘So Torsten with all this in mind, the next big question I would like to ask is, will Rolls-Royce ever go electric?’ ‘Absolutely, within the next decade, we will be electric. Over recent years, we’ve made our location greener at Goodwood, so it’s definitely in our plans.’

The ethos behind a Rolls-Royce doesn’t amount to engine size or horsepower like many other high-end cars, rather it’s an integral part of one’s lifestyle. Speyside, the chosen location that is heritage-soaked in whiskey culture  and affluent stately homes, equally boasts dramatic scenery that artfully compliments a vehicle of such regality like no other. 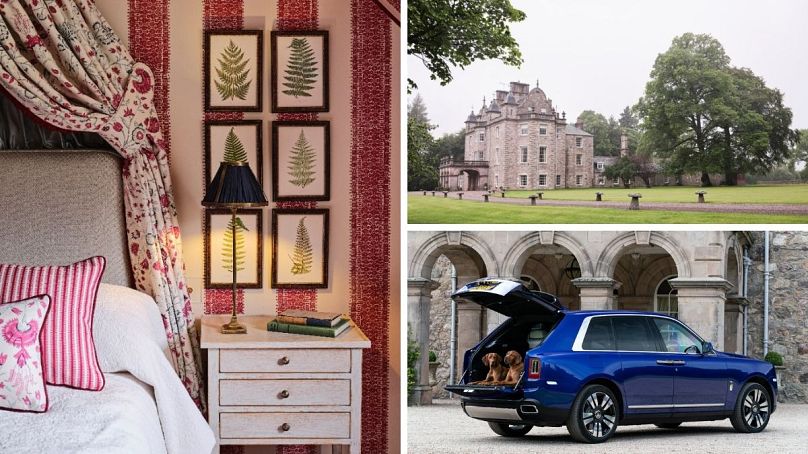 The 25 Most Expensive Pens In The World
Art

THE NEW CAPSULE JEWELLERY COLLECTION LAUNCHED TO HELP WOMEN IN NEED
Jewellery
©Highlifechannel ™ 2020
We use cookies to ensure that we give you the best experience on our website. If you continue to use this site we will assume that you are happy with it.Ok