Rihanna’s Louis Vuitton Trunk Obsession Is Limited To Artists Only

Obsession over, fans of Rihanna’s style will know that her love for Louis Vuitton trunks goes beyond the house’s collaboration with the Japanese artist – she has had a penchant for limited-edition iterations of the luxury carry cases for years.

The “Work” singer was first spotted carrying a malle in 2014, and it barely left her hand until 2016. The bag in question was a Louis Vuitton x Frank Gehry Twisted Box from the Celebrating Monogram collection, which saw Louis Vuitton ask Gehry, Karl Lagerfeld, Rei Kawakubo, Marc Newsom, Cindy Sherman and Christian Louboutin to reinterpret the house’s monogram for a capsule of inspired pieces. Gehry, the architect behind the Fondation Louis Vuitton in Paris, reimagined the trunk in a manner that speaks to his building shapes, but in a wholly functional way. As well as the tan top handle, there’s a detachable shoulder strap (which RiRi has never utilised) on the surprisingly capacious bag branded with a high-vis blue monogrammed patch. Christie’s sold one in 2015, a year after its inception, for $4,375.

From one collector’s item to another, the Louis Vuitton x Takashi Murakami vanity case dates back to Marc Jacobs’s era at the brand, too. When the former creative director invited Murakami to redesign Louis Vuitton’s spring/summer 2003 accessories collection, he took the brief and ran with it, introducing an explosion of colour to the trademark LV logo print. The collaboration, which also spawned the Cherry Blossom and Character bag styles, was discontinued in 2015 under Nicolas Ghesquière, but easily identifiable items from the tie-up are in circulation on the arms of the elite.

A handful of other Louis Vuitton bags – from the Palm Springs backpack to runway pieces from Virgil Abloh’s menswear shows – have all had their turn in Rihanna’s wardrobe, but none have received the same devotion as her rare pieces. Having some of the world’s most-esteemed artists dangling from her wrist not only signals her influencer status yet again – it marks her as a savvy businesswoman. Louis Vuitton is the foremost brand in the luxury stable that backs her Fenty fashion label: LVMH. Rihanna is keeping her accessories in the family. 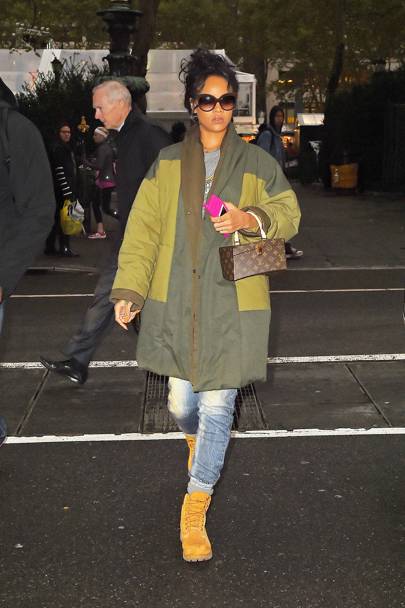 Tags:
Previous Article
A Quiet Revolution at a Storied British Yacht Builder
Next Article
A Scottish Castle in Perfect Condition Is On Sale