Ireland is synonymous with horse racing and the country was able to celebrate its rich history with the world at this weekend’s showpiece event.

The Longines Irish Champions Weekend  — a two-day racing festival worth $5.3 million in prize money — is co-hosted by the famed Curragh racecourse and nearby Leopardstown.
A truly world-class field assembled on Irish shores this year and the weekend started with a stellar schedule of racing at Leopardstown, where a familiar face dominated proceedings.
Legendary Irish trainer Aidan O’Brien  enjoyed yet another successful day at the races, winning four of the eight races on show.
Most notably, he watched on as Magical claimed the prestigious QIPCO Irish Champion Stakes, providing O’Brien with his first winner of the Group One spectacle since 2011.
The race favorite was well ridden by Ryan Moore who had positioned his mount perfectly throughout the race to see off competition from a world-class field.
“We knew she (Magical) was going to be in real good shape for today (Saturday) and I couldn’t have been happier with her,” O’Brien said after the race.
“She’s a lovely filly. We know she gets the mile and a half and handles an ease in the ground, she was back to a mile and a quarter today on fast ground and Ryan gave her a lovely, uncomplicated ride.”
If that wasn’t enough, both Magic Wand and Anthony Van Dyck — also trained by O’Brien — finished second and third respectively, serving to underline the trainer’s dominance.
It was an O’Brien who also trained the winner of the day’s only other Group 1 race, although this time it was left to Aidan’s son, Joseph.
He watched on as Iridessa took the honors in the Coolmore Fastnet Rock Matron Stakes.
Sunday saw nine races from the historic Curragh racecourse but, surprisingly, did not see another win for the O’Brien family.
If the Irish Champion Stakes was the highlight of the first day, then the Irish St. Leger was certainly the headline for the second.
This time it was fellow Irish trainer Dermot Weld who was celebrating as his horse Search For A Song held on to claim victory.
Weld — who has been named Ireland’s champion trainer on 21 occasions — has now trained eight winners of the Irish St. Leger.
However, this year’s winner — ridden by Chris Hayes — was not widely tipped and did not get off to best of starts.
“I’m half-shaken a little bit. Nothing really went right at the start and you normally go out in these races and have a plan,” Hayes said after the race.
“I knew after a furlong I’d be getting into a row with her.” 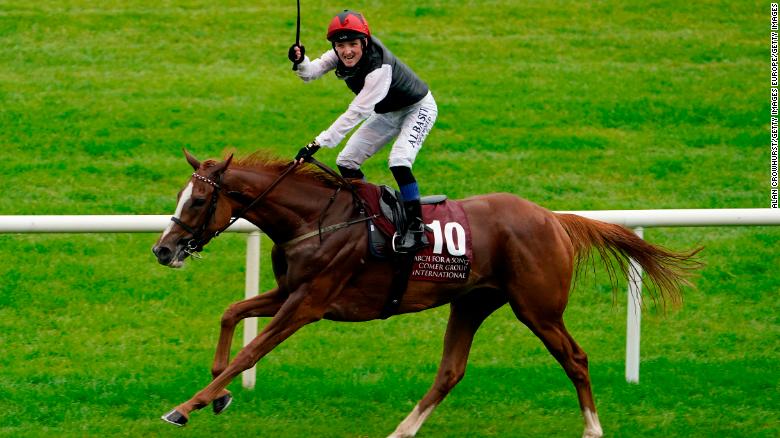 The festival was not only a chance to watch some of the world’s best thoroughbreds, but it also celebrated elegant fashion, gourmet food and drink and other entertainment.
Racing fans could also visit a number of leading yards, stud farms and equine hospitals for a behind-the-scenes look at Ireland’s racing industry. The Irish National Stud  is also situated nearby.
Tags:
Previous Article
Franny Norton on his remarkable career: ‘If we win the William Hill St Leger at Doncaster it would be my crowning achievement’
Next Article
Cindy Crawford: The Supermodels & I Were Like A ’90s Boy Band