BEHIND THE SCENES AT CHRISTIE’S AUCTION HOUSE, WHERE DIAMOND RINGS SELL FOR MILLIONS

Clutching at catalogues and licking the tips of their fingers as they flip from page to page, prospective buyers fill the room, following the lots as the auctioneer calls them out. I watch them raise their paddles surreptitiously and, unused to the confidential nature of auctions, find myself peering around with curiosity. Understandably, my gaze is met with taciturn stares from buyers who wish to remain anonymous in the crowd. I soon acclimatise to auction etiquette and make sure to sit firmly on my hands, for fear of scratching my nose and ending up the proud owner of a 19th century diamond tiara.

I am at Christie’s Auction House in St. James, London, having gained exclusive access to the 2019 Important Jewels Sale.

Founded in 1766, Christie’s is one of the two largest auction houses the world over, alongside competitor Sotheby’s. It’s the place where Leonardo da Vinci Salvator Mundi sold for $450.3 million, where Elton John flogged 20 oh his luxury cars and the Givenchy black dress worn by Audrey Hepburn  in ‘Breakfast at Tiffany’s’ was bought for just under half a million pounds.

Back in the room, there is a hushed sense of excitement, which gradually simmers as higher priced items appear on the screen. Christie’s staff can be seen manning the phone banks in lines, negotiating with clients on calls as each item progresses. “The sapphire and diamond wristwatch is now at £80,000 Madame, would you like to say £85,000?” one might mutter discreetly down the phone at any given point. Said wristwatch ends up being bought for £87,500, a mid to high price point of the day’s proceedings.

A rare medieval sapphire ring, hailing from the 1400s, goes for £30,000. The design is iconographic, with the infant Christ engraved on one side of the gold mount. The ring is one of the oldest items they have ever sold at auction.

When you think about it, the multi-million pound auction industry epitomises the true meaning of sustainability in many ways. The value of precious jewels is recognised and passed down generations, allowing them to gain a new lease of life. Pre-loved items get to extend their lifespan – it’s recycling, on a high end scale.

David Warren has been at Christie’s for 40 years, now as Senior International Jewellery Director and Head of Jewellery Middle East. His passion for selling on estate and second-hand jewels is instantly apparent when we meet. With a twinkle in his eye, he recalls the 14.62-carat Oppenheimer blue diamond, which made history at Christie’s in 2016, selling for an eye-watering 56 million pouds . The rare blue diamond, often described as “the gem of gems” , set an all-time record as the most expensive jewel ever sold at auction.

“Auction houses allow one-of-a-kind pieces to be passed on and sustained over time”, David explains. “In much of the jewellery we deal with, materials have been set and re-set, generation to generation, changed to suit the style of the day. You can see how they evolve. Stones will get re-polished or re-cut into a more modern shape for example.”

Then there’s the element of low waste, David elaborates, citing goldsmiths as a group of people who truly understand the value of zero waste work. Obviously, gold would never be classified as waste, but the principle still applies.

“In their workshops, gold dust will naturally fall to the floor as the metal is cut and filed. As a result, goldsmiths don’t sweep the floor all year round until Christmas eve. It’s too valuable to be wasted! At the end of the year, they sweep it up and find they have a full pouch full of gold dust worth £3,000 or so. They set a good example.”

As I watch jewel after jewel being sold for tens of thousands, I am drawn to a select few pieces in particular. An early 20th century old-cut diamond ring by Tiffany is beautifully brilliant and has been cherished by the same family for generations. Originally given to the great, great grandmother of the present owner for her engagement in New York at the turn of the 20th century, it is now going to a new home. The diamond is a Type IIa stone originating in the Golconda region, India, and is an incredibly rare category accounting for less than 1% of diamond production worldwide. 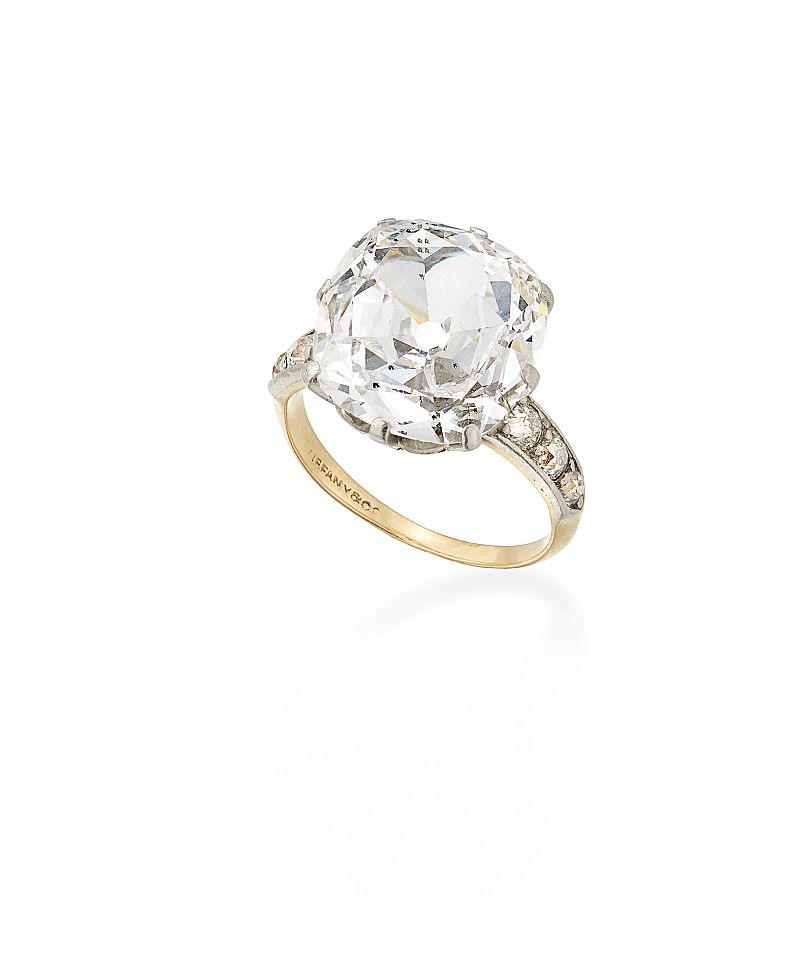 The star of the show is a stand-out art deco Cartier watch, an item of museum quality from the late 1920s. The multigem and diamond design is remarkably intricate, with sapphires around the edges and a delicate timepiece in the centre. “Every part of it is decorated, it’s a genius piece of design,” says David Warren. “The emerald is from an old maharaja’s jewel – it’s been re set, reused and recycled.”

Over the course of the day, the total sale including buyer’s premium was £8,304,000. While prices may be high, what you’re buying is a little pocket of history. Rarely would one normally own something over a decade-old, an item from the Renaissance or even as far back as the Medieval period.

As JCK, the US industry authority on Jewellery  maintains, when it comes to jewellery and watches “used doesn’t have the same pejorative connotation as it does with other categories of consumer goods like cars or clothing.” Pre-loved jewellery is one way to preserve history and give it a chance to live on for many years.