THE NEW WORLD OF WATCHMAKING AT SIHH 2019

High-end watchmaking is an industry steeped in tradition and proud heritage, which can prove to be a problem when the modern world comes knocking. However, at this year’s Salon International de la haute Horlogerie, tradition met tech in a much-needed boost to the industry.

The 29th edition brought together the best watchmakers in the world for four days to show off their latest creations.

SIHH kicked off on Sunday night at the inauguration party, with all 35 brand CEOs gathering for the annual photo to talk shop and let their hair down for the evening. The show continued in kind, with evening cocktail parties at various stands and Champagne as a well-deserved treat for industry professionals – and writers – at the end of each day.

For the second year running, SIHH was also open to everyone on the final day, giving the public a chance to be among the first to see the latest in the enigmatic world of luxury timepieces. Here are the highlights from Geneva’s world of superwatches.

Call of the sea

A major new partnership was unveiled by Panerai, straight out of the traps on day one. In support of its homeland, the Italian brand has become the official sponsor of Luna Rossa, the Italian yacht and crew looking to compete in the 36th America’s Cup. Panerai joins Prada and Pirelli to create a trinity of P’s for the Italian team, and skipper Max Sirena doesn’t underestimate how important the new partnership could turn out to be: “This is the period where we are taking strategic and important decisions, which is going to give us a result in a few years’ time.” 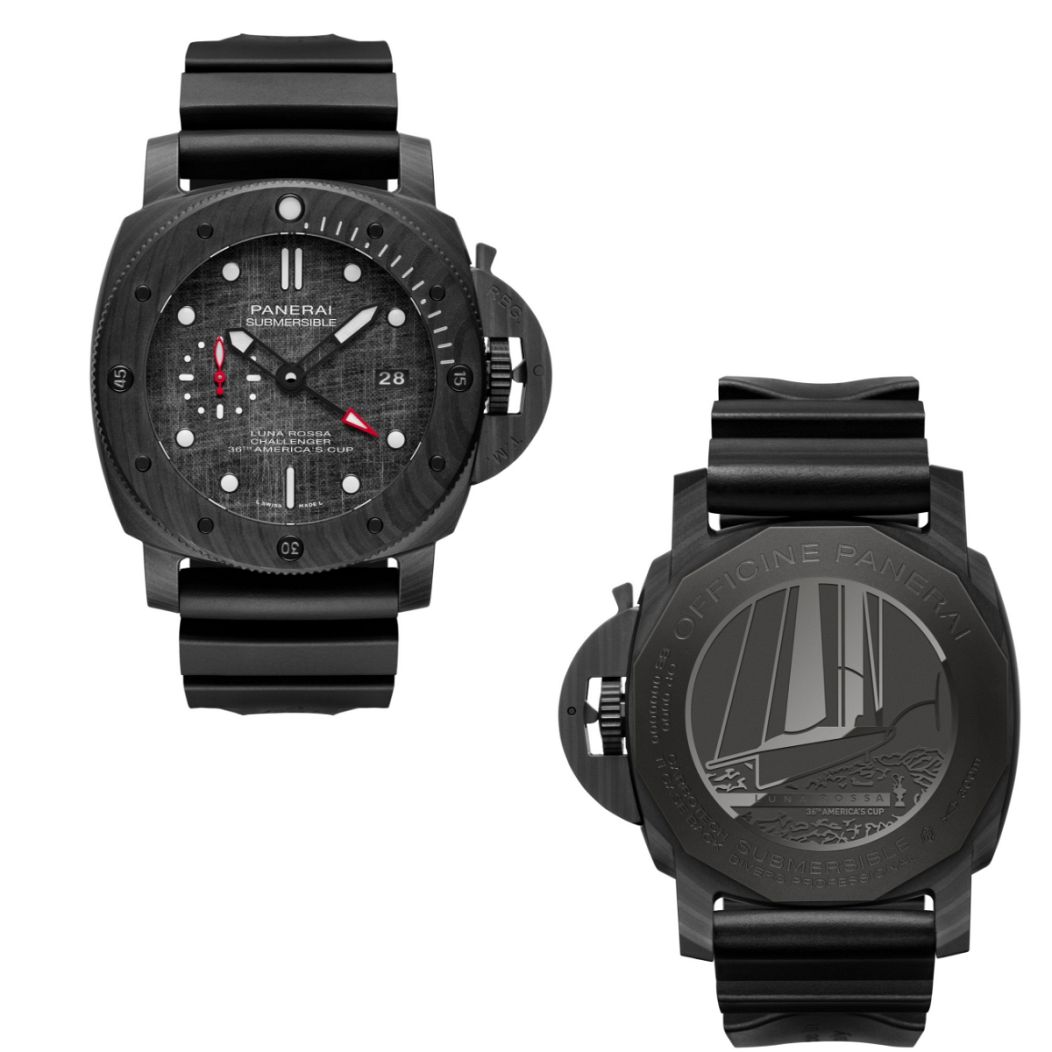 In tribute to the agreement, Panerai has released the Submersible Luna Rossa 47mm. The case, like the boat’s hull, is made of carbon fibre, and sailcloth has been applied to the dials, adding the finishing touches to a professional diving watch water-resistant up to 300 metres.

Hermès made an impression with its brooding entrance design. Conceived by London-based Hideki Yoshimoto, the imposing sphere was inspired by Hermès’ latest release, the Arceau L’heure de la Lune. The new watch displays the moon’s phases in both northern and southern hemispheres simultaneously, leading Yoshimoto to create his own interpretation of the double moon concept: “There aren’t two moons, but two moon faces.

“It’s about sharing. We have billions of viewpoints of the Earth in the history of humankind. We were all born here, all of us have spent our lives here, and everyone has looked at the same moon. That’s the beauty of the double moon concept. What we wanted to feature is not the moon but the Earth.” 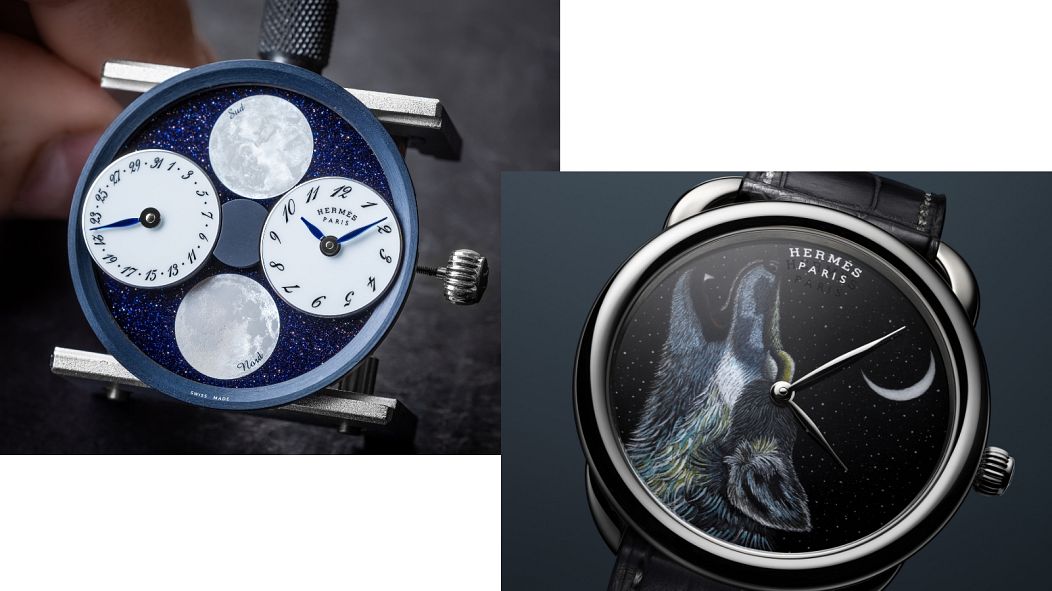 Another in the new collection is also a contestant for best name at SIHH 2019 – the watch with a wolf howling at a crescent moon is aptly titled the Arceau Awooooo. Yes, that’s five o’s.

While haute horology doesn’t have the strongest record accepting the fast-paced world of technology, this year’s SIHH had a decidedly futuristic addition. The SIHH LAB, an ongoing research and development incubator, included innovations from the worlds of craft, augmented reality – and cocktail making – to showcase the tech at the forefront of watchmaking.

Fabienne Lupo, Managing Director of the Foundation de la Haute Horlogerie, sees the LAB as an important new development for the show: “We are a really innovative, contemporary, modern and dynamic industry. We wanted to show that, and also attract new talent.”

A highlight of the LAB (alongside the unarguably attractive cocktail-making installation) included Leap Motion gesture recognition. Simply place a special strap around your wrist, and through your phone not only see how any watch looks on you, but also interact with the timepiece.

Lambo Italiano. Roger Dubuis has a reputation for the dramatic, which came as no surprise to anyone who took a look at the Lamborghini installed at the front of the Maison’s installation. Roger Dubuis’ creative team has designed a unique timepiece, the Excalibur One-Off, inspired by the recently unveiled Lamborghini SC18 Alston supercar. Like the watch, the SC18 Alston is Lamborghini’s first ever one-off hypercar.

Collaborating with the car manufacturer – and tyre godfather Pirelli for the strap – Roger Dubuis has packed as many technical novelties into the Excalibur as seems to be humanly possible, including a completely unnecessary but very fun function selector. Like a supercar mode selector, choose between ‘W’ for watch winding and ’S’ for setting the time. Ridiculous and brilliant. 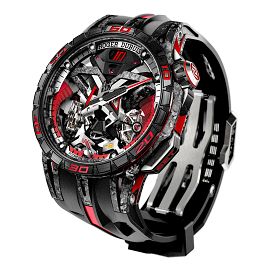 Cartier had a huge presence at this year’s SIHH. One particularly special part, however, was the Cartier Privé collection, the latest in a line of capsules celebrating the evolution of watches throughout history’s fashions and technological developments. At SIHH, Cartier chose to release updated versions of the 1906 Tonneau. The original had an unusual shape, a mix between rectangle and oval. This was to fit better on the wrist and was a precursor to a more modern shape. 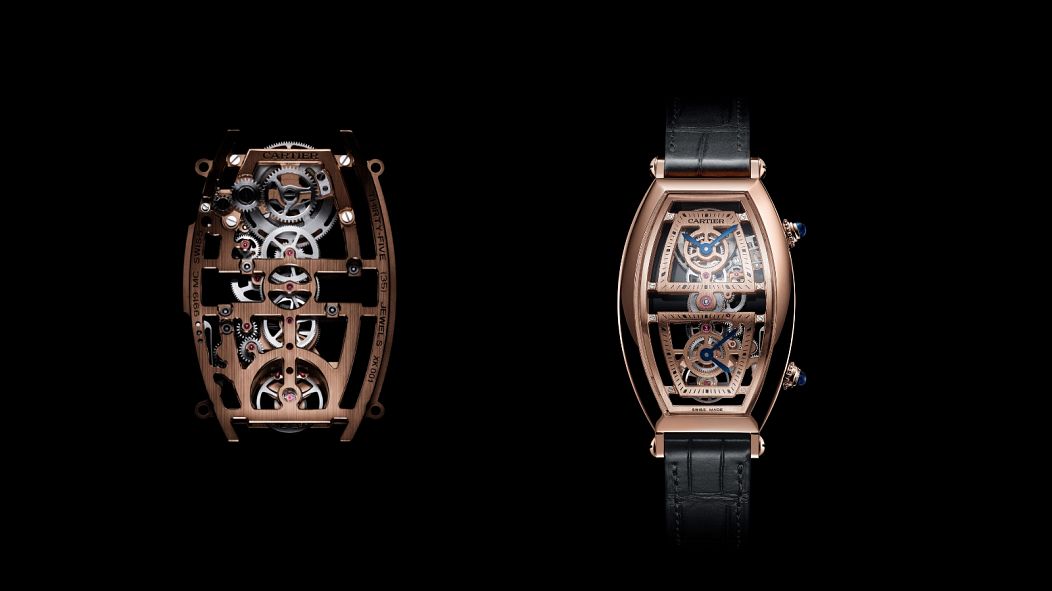 Cartier has released two new versions of this seminal timepiece. The hours and minutes model sticks close to the original, with slight contemporary changes. The second piece, a skeleton dual time zone model, has incorporated what was originally two separate mechanisms – one for each time zone – into one movement, retaining the Tonneau’s original aesthetic.

It’s an important year for A. Lange & Söhne. The manufacture has developed 63 calibres since founder Walter Lange and his partner Günter Blümlein presented four new wristwatches on October 24th 1994, marking a renaissance for the company. A quarter of a century later, the most famous of these remains the LANGE 1. 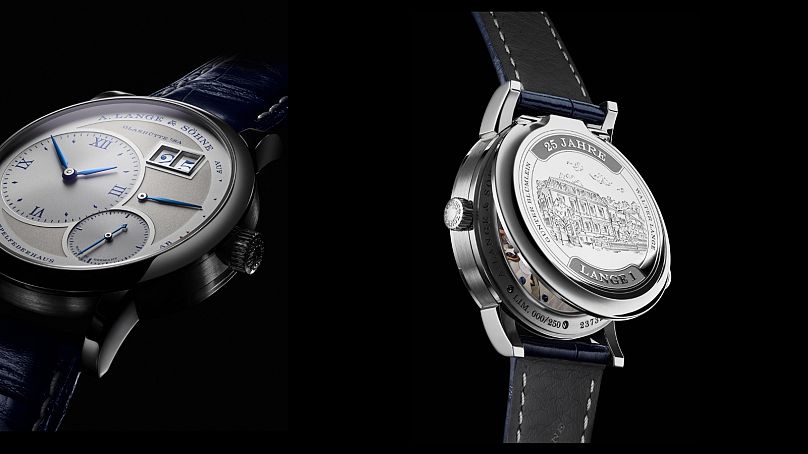 As you’ve probably guessed, the manufacture is celebrating the milestone by releasing an update of the original LANGE 1. The white gold version is limited to 250 pieces and features a deep blue printed argenté dial and a hinged cuvette (the back of the watch) with an engraving of Lange’s headquarters in the town of Glashütte, the birthplace of German watchmaking. 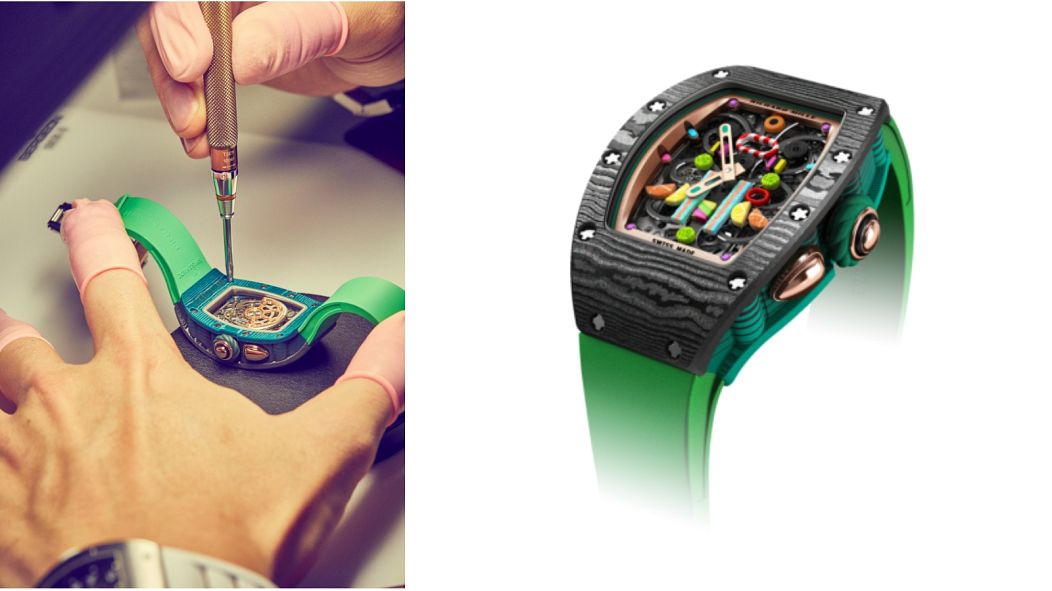 Richard Mille has tried to sweeten the deal for its customers by releasing the Bonbon collection, a range of confectionary-related timepieces. Cécile Guenat, artistic director of the collection, based the ten pieces on three existing models, revisiting them with a palette of 60 colours. The attention to detail even comes down to the crowns of some pieces being shaped like cupcakes and ice cream. The RM 07-03 Marshmallow is incredibly realistic thanks to modern enamelwork, while 3,000 miniature sculptures are integrated into the three pieces in the Fruit line, which includes the see-it-from-across-the-room bright lemon and strawberry (RM 16-01 Citron et Fraise). 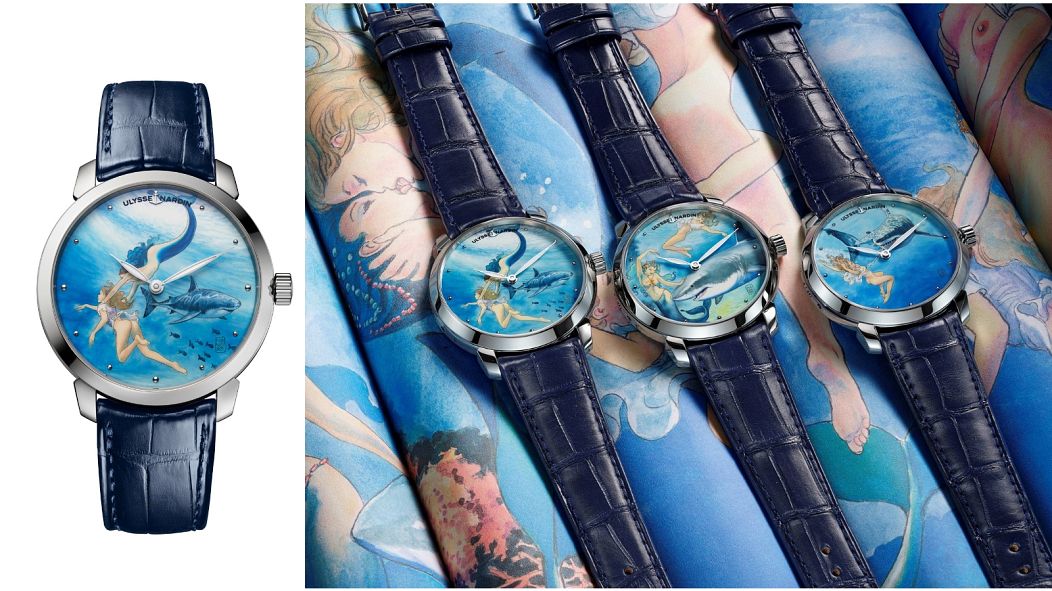 Manara’s collection of ten images has been transferred onto the watch face through a technique known as micropainting, meaning the reproduction is as intricate as the original. Ten pieces per drawing will be made, both in stainless steel and rose gold, limiting the series to 200. Manara says of the collection “I am sure that mermaids do exist”. If they’re anything like this, I’m going sailing more often.

Just off the show’s main thoroughfare is the Carré des Horlogers, a selection of 17 smaller brands dedicated to craftsmanship and bespoke projects. Armin Strom, for instance, specialises in skeletonisation – where the intricate inner workings of the timepiece are visible – while futurist brand Urwerk takes its name from the ancient Mesopotamian city of Ur, where our entire system of measuring time originated. 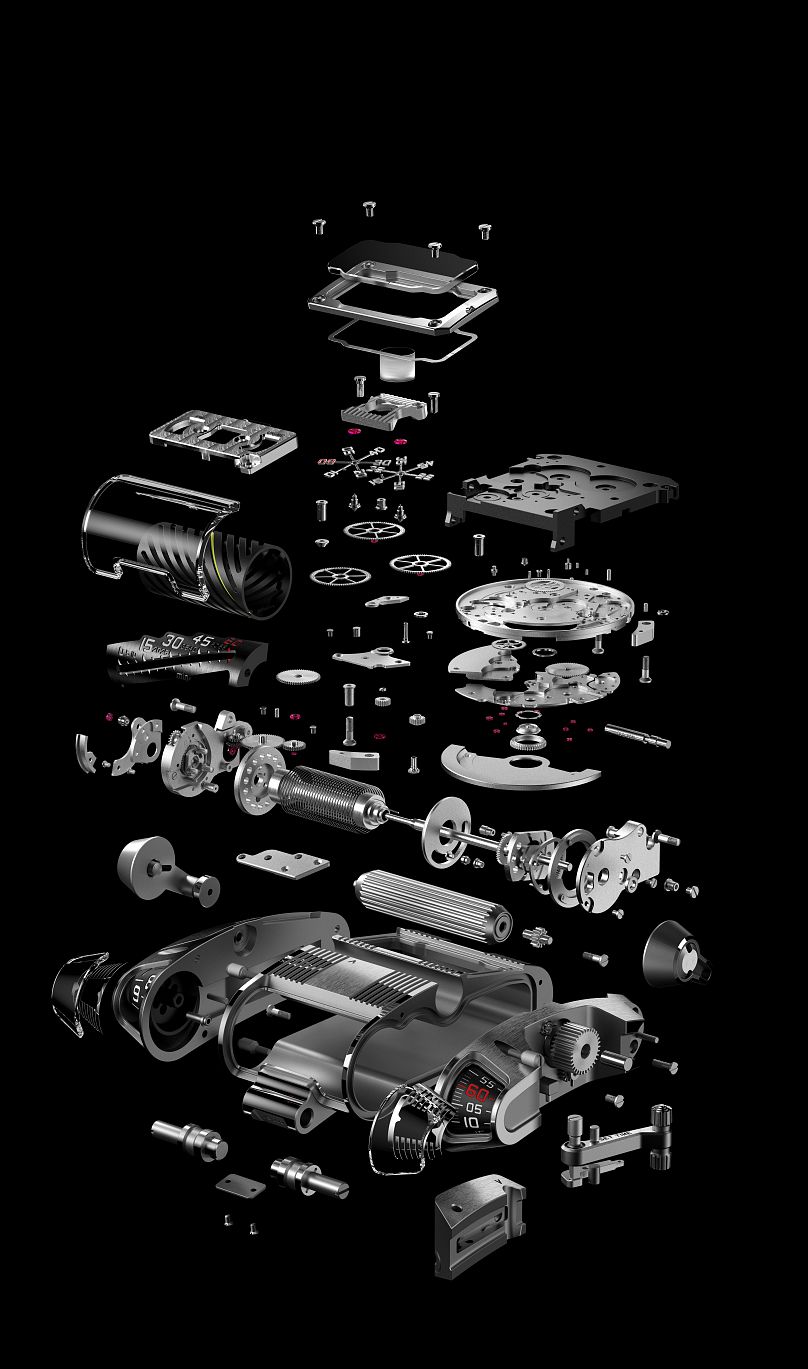 It’s here that many horological advances find their home. Belgian brand Ressence recently released the Type 2, the first watch to have a smart crown. The light-powered e-Crown digitally registers the manually-set time and automatically checks and readjusts. Even after three months of inactivity, once the owner taps the crown, it will set the watch to the right time.

Also in the Carré des Horlogers was the Time Æon Foundation, which safeguards traditional watchmaking knowledge and skills while encouraging technological developments. Supporters include Greubel Forsey, Urwerk and Ferdinand Berthoud, modern brands that all have a reverence for tradition.

Tags:
Previous Article
The Duchess Of Cambridge Picks Diana’s Favourite Pearl Earrings For The BAFTAs Red Carpet
Next Article
THE STORY OF A ‘RESPONSIBLE’ LUXURY BRAND

Spitfire around the world
HighLifeChannel Sep 15

Luxury Lego: building a Bugatti Chiron is not child’s play

Spitfire around the world